SOVIET 6th RIFLE DIVISION TROOPS DEFEND BREST FORTRESS AGAINST GERMAN 45th INFANTRY DIVISION, JUNE 22–30, 1941
The Russians built the Brest fortress between 1833 and 1842, at the confluence of the Bug and Mukhavets rivers; they improved the fortifications in 1878–88, and again in 1911–14. The fortress stood on four islands: central, northern, western and southern. The Treaty of Riga (1921) awarded Brest to the newly independent state of Poland, but the Red Army occupied it on September 22, 1939. (German troops under Guderian had captured it five days earlier, but had to hand it over to the Soviets.) The city and fortress stood in Guderian’s way again in 1941, and would have to be reduced quickly. The Soviet defenders belonged to elements of the 6th and 42nd Rifle Divisions, the 17th Frontier Guard Detachment, plus engineer, antitank, antiaircraft and other support units, totaling 7,000–8,000 men. The Austrian 45th Infantry Division provided most of the attackers, from I and III/IR 135 plus I and III/IR 130. Firing in support were 12 artillery batteries, 4th Nebelwerfer Regiment, 210mm howitzers, and two 600mm “Karl” siege guns firing rounds weighing over two tons. German artillery fire began at 0305hrs on Barbarossatag, and pioneers crossed the Bug in asssault boats at 0319hrs, capturing bridges intact. By noon I/IR 135 had occupied much of the northern island and taken the city’s rail station, while I/IR 130 took the southern island and five bridges over the Bug and Mukhavets – thus bypassing most Soviet gun positions and opening the Rollbahn for Guderian’s XXIV Panzer Corps. However, attempts to take the citadel by coup de main failed. By the 23rd most Soviet defenders had fallen back to the central island, destroying bridges behind them. Pockets of resistance held out under the command of majors and captains, and the front lines surged back and forth in seesaw fighting at the shortest ranges, while the ordnance of both sides destroyed the old brick fortifications around them. In this scene, Soviet infantrymen, led by Lt Kizhevatov of the NKVD Frontier Guards, take up firing positions in a fort archway after overrunning an emplacement formerly occupied by a German MG34 crew ; their weapons include a Maxim M1910 machine gun. The combination of bunker-busting German heavy howitzers and mortars, flamethrowers, and the sheer exhaustion of relentless close-quarter fighting took their toll by June 29 and 30. The final blow fell on the 29th, when seven Junkers Ju 88 bombers of Kampfgeschwader 3 dropped two-ton bombs on the last pockets still holding out. Shell-shocked survivors, including wounded in the hospitals and the wives and children of Red Army officers, began to surrender. The garrison commander and the commissar committed suicide, but some 400 men went into captivity. By the end of June the Germans considered the battle officially over, although some defenders held out until the second half of July. Capturing Brest cost the 45th Infantry Division 414 dead. 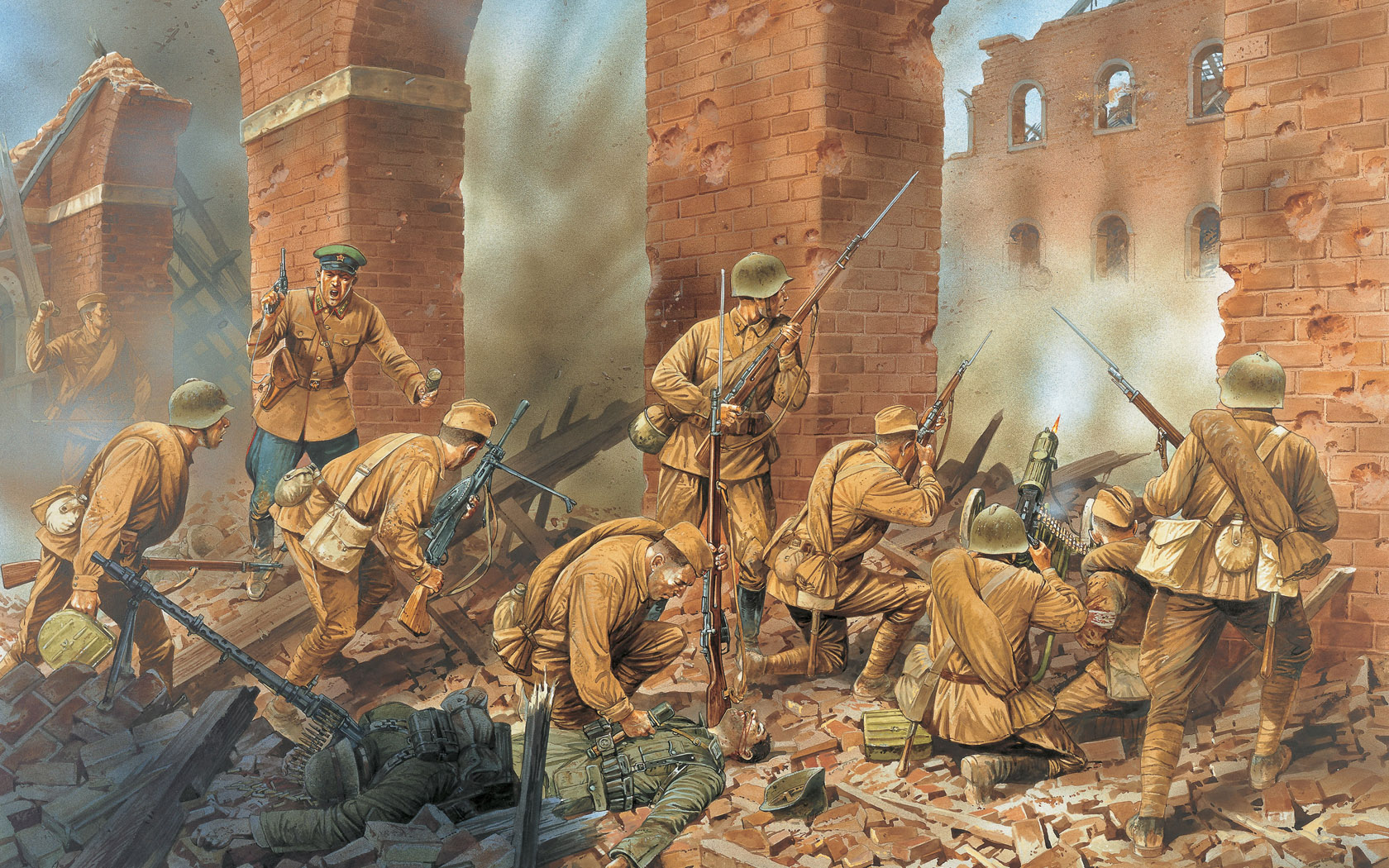