7TH PANZER AND 29TH MOTORIZED INFANTRY DIVISIONS LINK UP, CLOSING THE SMOLENSK KESSEL, JULY 16 1941
Smolensk sits at a crossroads of western Russia, on the main route of advance from central Europe toward Moscow. Over the centuries it has long been a commercial, religious and administrative center, and often the objective of military operations. The 7th Panzer Division (which had been commanded by Erwin Rommel during the western campaign of May–June 1940) led Hoth’s Third Panzer Group during the first three weeks of Barbarossa. Sweeping clockwise from Vitebsk toward Smolensk from the north, it was about to close Von Bock’s second major encirclement of the campaign. On the evening of July 15 elements of the division reached the Smolensk–Moscow highway near Yartsevo; the four-lane road was packed with Soviet traffic, the great majority of it still heading toward the west, and doom. Some way farther on was the major railway line, also busy with trains heading westwards. The 7th Panzer Division’s gunners wreaked havoc among the road convoys and rail traffic. Meanwhile, the 29th Motorized Infantry Division had so far been following in the wake of Guderian’s Second Panzer Group. After closing one of the numerous encirclements that made up the Minsk Kessel, the “Falcon” Division raced northeastward toward Smolensk, and in heavy fighting finally succeeded in establishing a bridgehead across the Dnepr at Kopys by July 11. They needed support from Sturmgeschütz Abteilung 203, a heavy Flak battery, an antitank battalion and corps engineers to secure their foothold, and Soviet counterattacks were so heavy that their dead were piled in heaps. On the 16th the division – described by Guderian as “a splendid unit” – entered Smolensk from the southwest; by that evening it had traversed the southern half of the city and was crossing the Dnepr onto the much more stoutly defended northern bank. Fighting in the city streets caused heavy casualties on both sides, and lasted until July 22. While the bulk of the 29th Division was thus engaged, however, its reconnaissance elements pushed on eastward, and linked up with troops of the 7th Panzer. This scene reconstructs such a meeting. On the rail embankment in the background, under skies haunted by the Stukas of Von Richthofen’s Fliegerkorps VIII, flatcars are still loaded with new T-34 tanks destined for the front. Crewmen from a PzKw 38(t) of the 7th Panzer Division’s reinforced Panzer Regiment 25 stretch their legs while awaiting orders; the tank bears the division’s yellow runic symbol, and the white temporary marking of Third Panzer Group – a stylized “Hh” for Hoth. It was significant that the Ostheer still had to employ more than 600 of these Czech tanks – note the extra-large tactical recognition numbers painted on the turret. Farther off is an SdKfz 232(Fu) radio-equipped armored car of 29th Motorized Infantry’s divisional Aufklärungs Abteilung, marked with the white “G” of Guderian’s Second Panzer Group. A group of senior officers speculate about the next objective – assumed at this stage by many German soldiers, from Army Chief of Staff Franz Halder down to the lowliest Landser, to be Moscow. Meanwhile infantrymen deploy to provide local security, and guard a few of the 300,000-plus Soviet prisoners who were rounded up in the Smolensk Kessel. 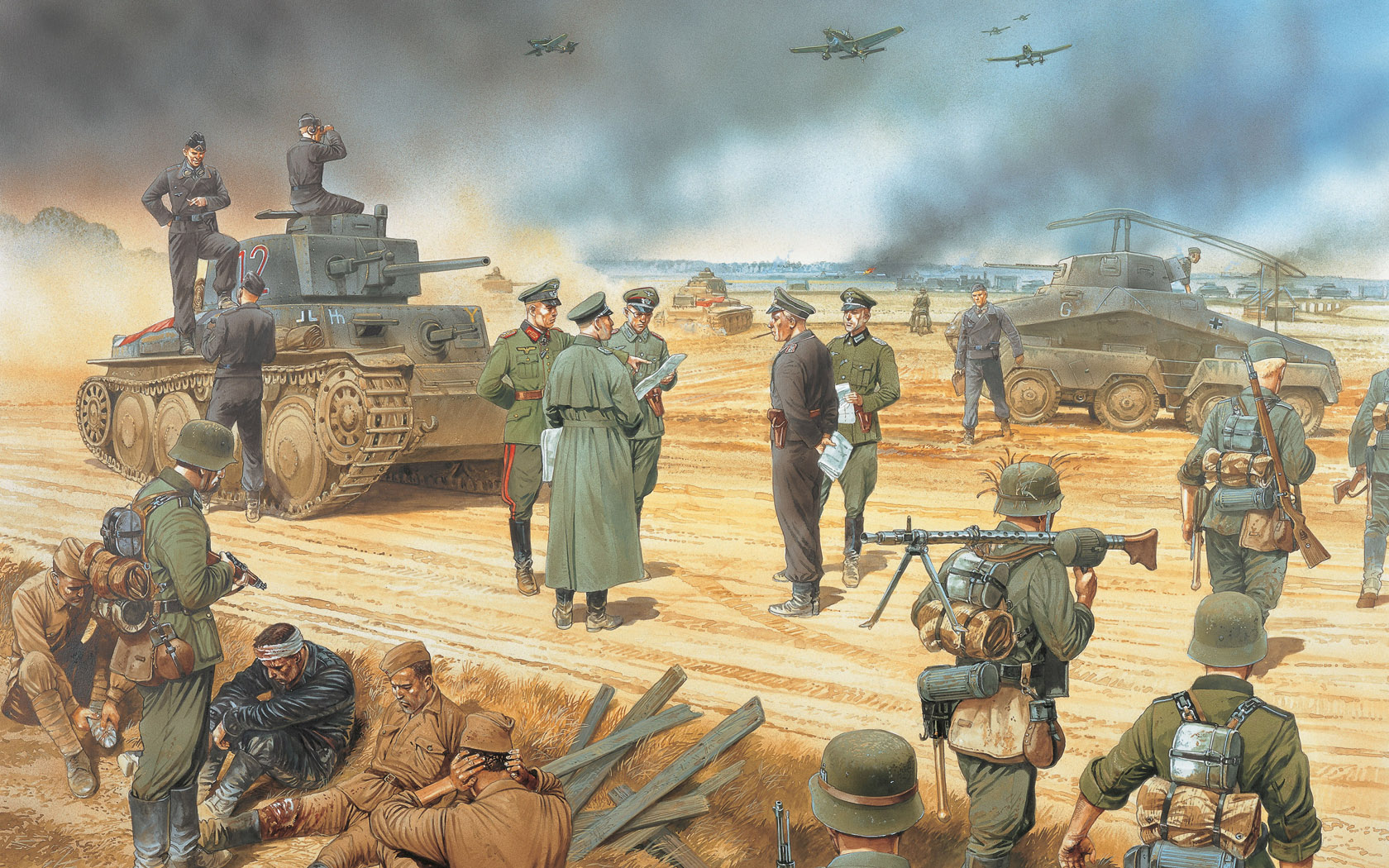