STREET FIGHTING IN WARSAW, 8 SEPTEMBER 1939
Having suffered a bloody nose at Mokra, the 4th Panzer Division crunched through the battered Polish lines during the following two days. With the brittle Polish defences cracked wide open, the 4th Panzer Division was able to take advantage of its mobility to carry out one of the most successful Panzer missions of the campaign, exploiting its breakthrough and racing to Warsaw. Reaching the outskirts of Warsaw a week after the start of the campaign, the 4th Panzer Division pushed into the Ochota suburbs in the southwestern approaches to the city. The ensuing battle highlighted the problems with operating mechanised forces in urban areas. By the time the 4th Panzer Division reached Ochota, the Poles had managed to scrape up a number of units to defend the capital. Lacking dedicated anti-tank weapons the Poles deployed 75mm field guns to cover key street intersections. The German Panzers of 1939 were not the impregnable steel fortresses of later years, and were vulnerable to nearly any weapon heavier than a light machine gun. They could be blown open by a 75mm field gun, and a confrontation between a Panzer blindly stumbling through unfamiliar streets and a well-placed field gun behind a barricade had predictable results and many Panzers were lost. The solution was to use infantry to locate and eliminate the field guns. But the early Panzer divisions had too few infantry for such a mission, especially when faced with Polish infantry blockaded in houses and behind barricades. Furthermore, the 4th Panzer Division had advanced so quickly that German infantry divisions were days behind. Here, a PzKpfw II light tank (1) cautiously advances with Panzergrenadiers (2) in support. Tank-infantry cooperation in urban environments was extremely difficult as the infantry had no way to communicate with the tanks, lacking a radio link except at battalion level. The experiences of tank use in Warsaw would convince German Panzer commanders that urban battles were better left to the infantry, a lesson that still resonates with contemporary armour officers. The attack of the 4th Panzer Division petered out after a couple of days of hard fighting due to events occurring further west. While the 4th Panzer Division had been racing to Warsaw, Gen Kutrzeba's Army Poznan had launched a surprise counterattack on German infantry divisions moving on Warsaw. The ensuing battle along the Bzura River temporarily halted the attacks on Warsaw and they did not resume until later in the month after the Polish forces were surrounded and crushed. 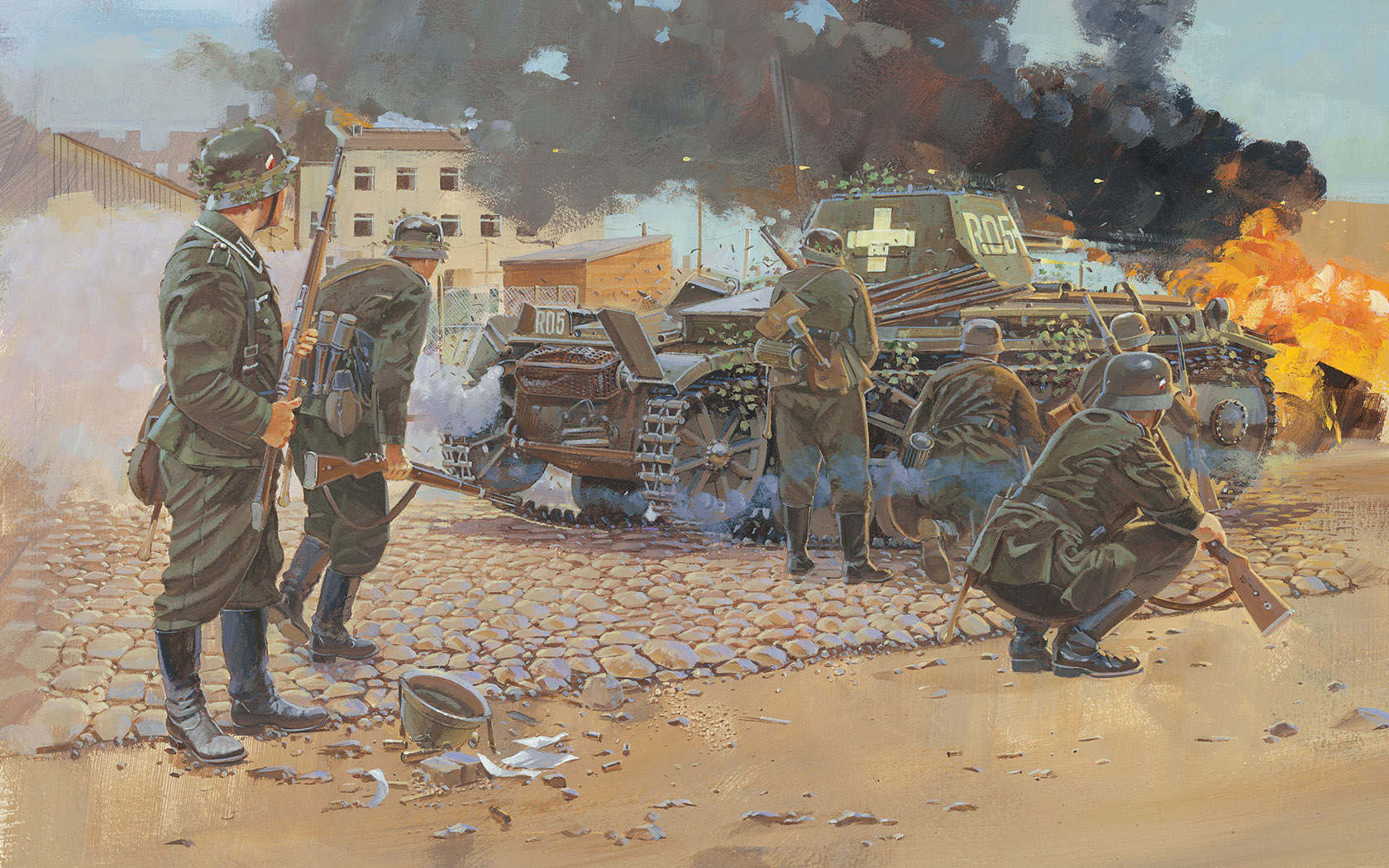